You don’t need to be an animal lover to appreciate that all they want is to survive and to be loved. The decision to ban certain breeds in the Dangerous Dog Act was always a thing that frustrated me but after meeting some of the breeds that are banned in the UK over the past few years I couldn’t help but feel ashamed that we as humans, that so frequently commit acts of moral evil by choice, could condemn such loving creatures to death purely based on their breed.

The Dangerous Dog Act of 1991 UK (updated 1997) makes it illegal to own any Specially Controlled Dog without specific exemption from a court, these dogs include Pit Bull Terrier, Japanese Tosa, Argentine Mastiff, Brazilian Mastiff and any cross breed of the four. There are ways you can own one of these dogs, which include strict rules involving microchips, tattoos, muzzles and yearly payments that are too high for the average Brit to afford, the documentary on Dangerous Dogs by Stephen Manderson aka Professor Green (link below) has lots of information on the act and I would recommend anyone watch it, even if it’s just to see Stephen’s beautiful Old Thyme Bulldog, Arthur.

My partner and I have both stereotypically dangerous breeds and banned breeds (Outside of the UK) in our family and the closest I’ve been to danger with any of them is excessive fluff or drool. This post is not to cause debate or friction to anyone in disagreement I simply want to tell my experiences with these breeds, share some tips and to express my love of the so called ‘Dangerous Dog’.

Not everyone grows up with dogs so I understand the fear some people may feel when approaching the bigger breeds. My house has always homed cats, rabbits, fish, and more 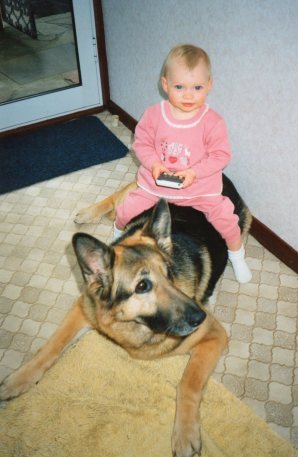 Me and Carly taken by my Nan

recently stick insects, a gecko and a snake but I am yet to own a dog myself. As a child though my best friend was an Alsatian (German Shepherd) named Carly who belonged to my Nan. Carly was my protector, my babysitter, my nap pillow and my playmate. My Nan at no point left us together unsupervised but Carly was every bit as kind and gentle with me as you or I would be with a human child. 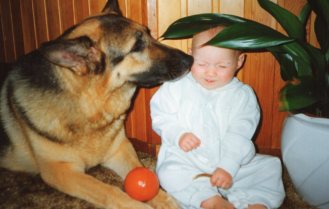 Kisses from Carly taken by my Nan

She passed at eleven years old when I was around four, after her passing I did not come into much contact with bigger dogs and when I did I was always a bit unsure. It wasn’t until I met my partner and was introduced to his families Rottweiler’s that I rediscovered my love of the bigger breeds. Although this breed is not banned in the UK there is a stereotype surrounding them, one that I cannot agree with.

The first one I met, Roxy, had just given birth to ten puppies (two of whom stayed in the family), as you would expect from any mother she was territorial and unsure of me. My partner taught me how to approach them and connect with them and now I approach any large breed, or small for that matter, with confidence and a whole lot of love and Roxy has become my favourite of the five Rotties in the family. Ronnie is pictured below, his head is the size of a small bear’s and his tail alone can leave you bruised but he thinks he is a puppy and he loves a good cuddle. He can be territorial and will attempt to intimidate me (I’m a small human) but if he ever does I stand my ground or remove myself. If a human was uncomfortable with my presence I wouldn’t press on them and the same should be said for ANY animal. I will speak a little more on intimidation later on.

Shortly after the Rottweiler’s I was introduced to the Pit Bull Terrier, a terrifying breed, jumpy and aggressive and likely to tear you apart- or from my experience a loving, soppy and playful breed that needs long walks and lots of love and attention. Beefy (a fitting name for a dog so strong, you can see each and every muscle in his body) is still to this day the soppiest dog I have come across. When I first met him he jumped up but as a breed with the energy of a Duracell bunny I expected no less. After a few minutes he calmed down and came over to rest his big head on my knee. His big sister Ty is an English Pit Bull, she’s smaller than Beefy but she remains the boss of the house. In contrast to the big ol ‘scary’ dogs they also have a little sister named Ruby who is a miniature Doberman. After careful introduction the three now play like they’re all the same breed.

The most recent ‘dangerous’ breed I met was an American Akita named Hogan. At first glance I considered they had adopted a Polar Bear from his size, which was mainly layers of moulting fluff. He had been abused as a pup and could be jumpy and unsure of people but the love from his family meant he was friendly and well behaved. 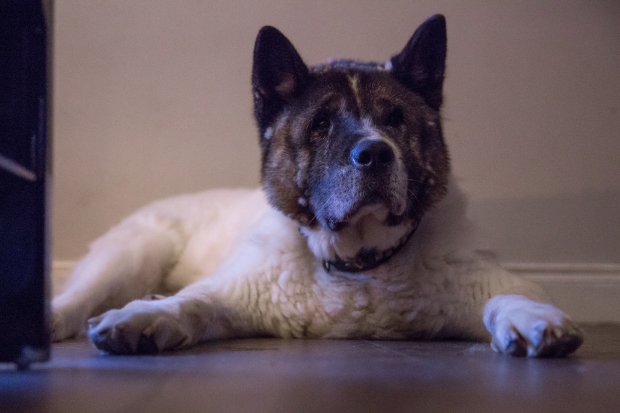 It is because of these dogs and many more I have met over the last few years that I have such adoration for ‘dangerous dogs’. They are big and strong but they’re also clumsy and loving and they have as much personality as they do fluff! Of course they can cause harm but they are no more likely to do so than a Jack Russell Terrier or a Labrador- or a cat for that matter. I often have people say that they are surprised by their pet’s reaction to me and Hogan’s parents were no different as they watched him sink into my lap as I smooshed his head. Dogs along with many other domestic and territorial animal can read us humans like a book, when I walk in a room with nothing but love in my heart for a dog I fully believe that they can feel it and their reaction always proves that. The same goes for any animal. Seriously I would buy a zoo if I didn’t prefer to see wild animals in their natural habitat –Blog on my trip to Kruga Park in South Africa to come!

I’d like to share some tips to anyone who loves big dogs but may feel slightly intimidated by them or people who may have been introduced to a family dog and will be spending a lot of time with them.

First and foremost always ask the owners permission to pet them and ask if they have any medical issues. I have found that many larger dogs have been nipped previously by smaller dogs and so do not like to be touched in certain places- just because they get friendly with you this does not throw the owners instruction out of the window!

Secondly a little note on intimidation for those who are new to bigger breeds, again this will be different for all animals and please ask the owner and keep them near until you are both comfortable with one another. As I mentioned earlier dogs can read us like a book and they will know if you’re unsure. This doesn’t mean that they will attack you over it but they will push their luck and try to show their authority. When entering the home of the dog try to ignore them at first and instead greet your human, this may mean pushing them away or turning your back on them. When they are relaxed and want to say hello they may push in to you, when this happens find a strong position so that you can’t be pushed away, stand tall and hold your head high to express authority. They will get the message that you are not someone they can push about and in time they will stop attempting to intimidate you. If this fails just move away and they will come around in their own time.

Please note that dogs are not inherently evil, unless brought up by a bad human they will only jump at you because they’re excited to meet you and they will only growl or grumble because they are unsure of you. At the be all and end all, a dog wants love and even shy dogs will want to be your friend. Give them time and space and understand that they are just as unsure of you as you are of them.

I part with some messages to anyone like myself that wants a big breed of dog. ‘A dog is not just for Christmas’ will be a phrase you have heard a thousand times over but you should really take in what that means. A big breed needs several walks a day, lots of space and lots of attention. If you cannot provide any one of those, wait until you can, both your life and theirs will be better off for it.

Remember that even the smallest dog will defend itself if it feels threatened so be mindful when inviting children to your home. If you are not 100% confident around your dog do not introduce them to others, spend time getting to know each other and ensuring they know who is the boss! When the time is right introduce children gradually and respect your dogs reaction to them. A dog won’t purposely nip or jump up to harm but be prepared to avoid this from happening by always supervising, separating them if needed and educating the children for future interaction.

In Loving Memory of Hogan who passed away 0n the 1st February 2017, sleep sweet x 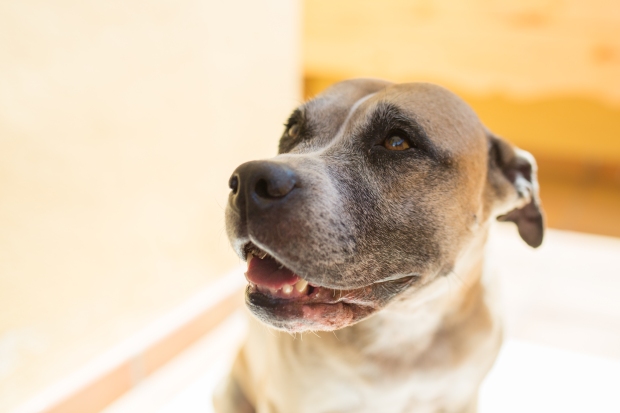 3 thoughts on “‘Dangerous Dogs’ and Me”

Recent Posts: Diary of a Klutz